A Monster of a Garlic Dip!

Whew! It’s that time of year to get the heck out of the house and into the yard, throw some stuff on the grill and chillax. This is one of my favorite things to put on oh, you know, everything… whether it’s from off the grill or straight from the refrigerated deli section. (It’s NBD, I won’t judge.) If you’re squicked out by the idea of raw eggs AND raw garlic (really though, what could go wrong?) you can substitute the 2 eggs for 1 small red, boiled potato that has been peeled, mashed and cooled.

Based on a recipe by Richard Olney 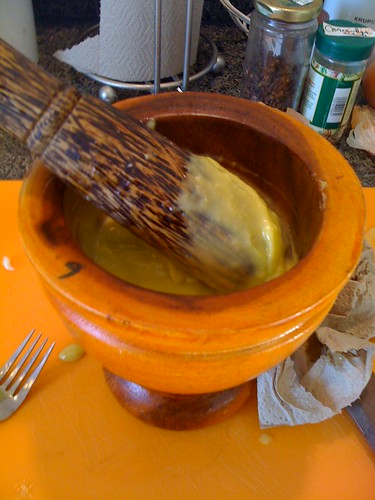 Crush the garlic with the sea salt until a rough paste forms. Add the whisked eggs.  Beat the eggs and salt-garlic paste together with the pestle until slightly thickened.  While turning the ingredients around the mortar with the pestle, slowly add olive oil by drops: begin with about a tablespoon’s worth and then follow with another dribble, about a tablespoon’s worth.  When it is well incorporated, add two more tablespoons in a slow, steady stream until it is well mixed.  At this point, it should begin to get a little thick.  Do not stop mixing while adding the oil; this will break the emulsion that is being created.  Add the lemon juice and about a teaspoon of the lukewarm water.  Continue to add olive oil while mixing continuously.  After every quarter cup of oil or so, add a touch more water to thin out the mixture.

If the aioli breaks, empty out the ingredients and add 1 more egg yolk to the empty mortar.  Add a few drops of lemon juice, and add the broken aioli, spoonful by spoonful, back to this mixture while stirring with the pestle.

Serve aioli with the following accompaniments:

I feel comforted. Is it #beefstew is it #potroast

Uuuuhhh This is screaming CSI photo but it’s act

@fiascoani it’s the gift that keeps on giving.

Ummmmm anyone else have a fridge full of fat? #duc

And with that, see ya later #worstyearever #2020

I learned a LOT watching a live cassoulet class wi

@meatballsndwch You know that’s what I’m doing RIGHT NOW. I don’t see it :(

@meatballsndwch Aaah ok yes I did TT. And I got mg first stimulus check. Wow I have NOT been paying attention, lol!!

@meatballsndwch I use me. I’m my tax person. I don’t recommend me...

@meatballsndwch Neither me or mom got ours. No email either!!

Bring on the New
Uncategorized

Bring on the New